A note from houston

Sprig's fourth arc is now available in Paperback and eBook. Buy it now at any of the links below! Don't forget to leave a review to help other people find it! 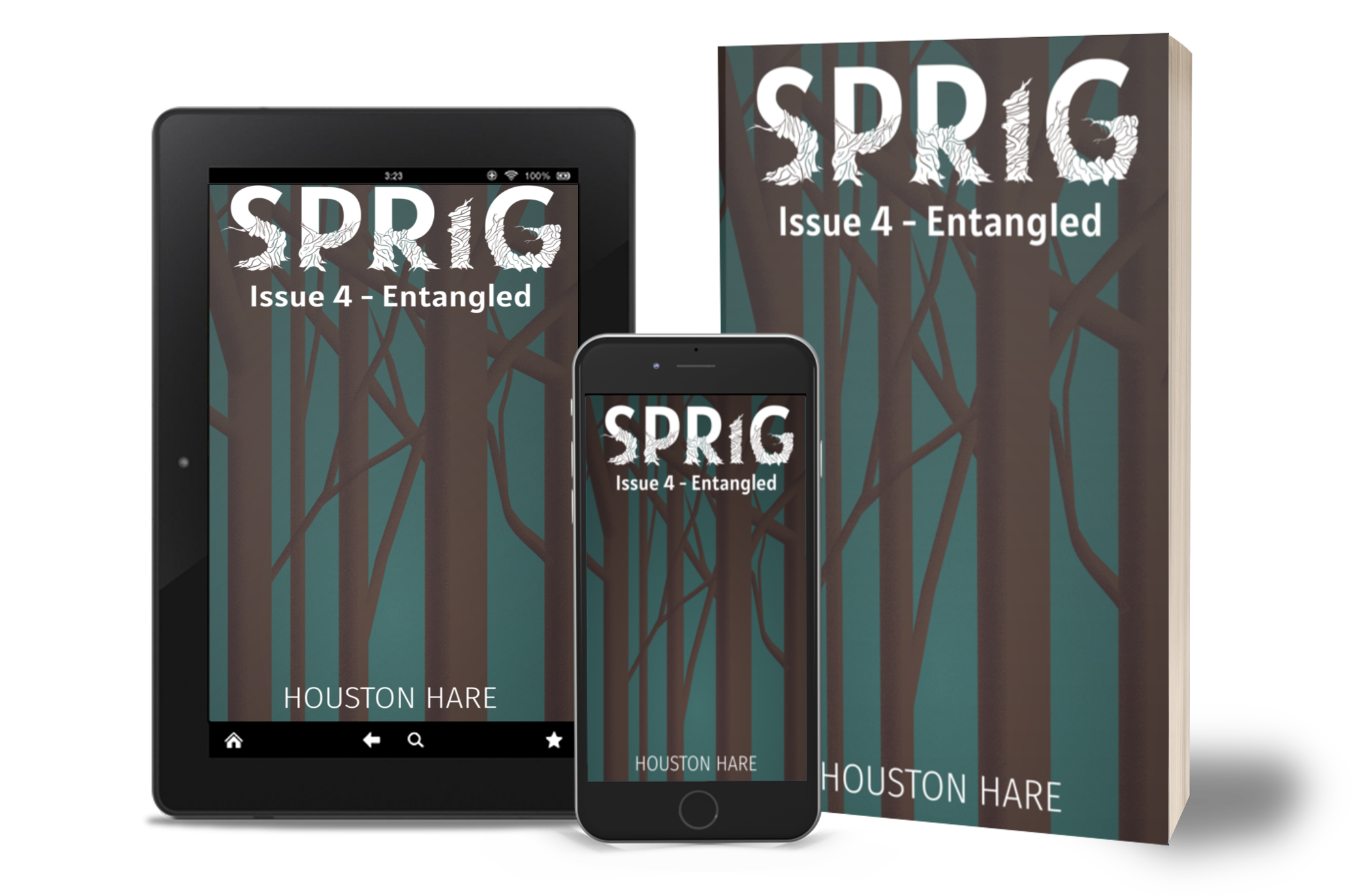 The red-haired Dwarf sang his song as he sat in the corner of his cell. He was slumped on a bench looking rough and worn like he'd been sleeping in a pig pen for days. He had a nice voice despite his lazy singing. From what I could make out through the metal bars that separated us and my blurry vision, he had a kind face.

"Oh good. You're awake," said Zef. I could tell it was him without looking. He had the voice of an old man.

"Here, you should drink," he continued. I could hear him shuffling with something and then a waterskin was pressed to my lips. I drank it, because it was Zef, although I would have liked to at least sit up first.

I took a couple of gulps and then choked a bit as I sat up. "Where's Chipry?" I said in a panic as I coughed up water.

I blinked the haze from my eyes and observed the jail cell I was stuck in. Zef was locked in with me. To the left of our cell was another that held Tigala and Lolan and to the right was an open area where the singing Dwarf was shackled to the wall.

I looked back at Zef, letting him know I still wanted an answer. Zef looked to the side, and then back at me. "They trapped him in a small cage. They were afraid you would be too dangerous with him."

"I think so. The bird bit Rodrigo's finger before they were able to trap it, but Chipry didn't look harmed," said Zef.

I took a deep breath. They better not hurt him. I thought about what Zef had said and let out a chuckle under my breath. "Rodrigo was afraid of what I could do with a bird?" I asked.

"They all were a bit nervous," said Zef smiling back.

I looked over at Tigala and Lolan in their cell. Tigala had her arms folded and wore a scowl on her face. Lolan was still knocked out, but he had some cloth wrapped around his head and one arm.

"They said he'll be fine. He just needs some rest," said Zef. "Kind of amazing after what he's been through."

I nodded in agreement.

"So they locked us up then?" I said. I wasn't terribly surprised. We weren't exactly crowd favorites in the colony and we had all survived. I wasn't sure I could say the same for the other group.

"He might still come through. Maybe he is just waiting for the right moment," Zef said.

Tigala looked at us with only her eyes and then stared back at the wall as she said, "He's a snake."

I looked around. It was a dark room, probably below one of the buildings in the square of the colony. There was one small window with bars over it casting blocks of light across the interior of the stone foundation. Above us, there were wooden beams making up the main floor of the building.

As I looked I noticed the lazy Dwarf again. He was slumped in the corner with his long red hair laying across his face. He sat uncaring, humming to himself.

"Did you really have dragons in your land?" I asked the Dwarf.

The Dwarf was humming when I said it. It took a few moments of me staring for him to notice I was talking to him.

"Ahem, uh, you were talking me?" he asked, jabbing a thumb at his chest.

"Yeah. You were singing about dragons. Are they real?" I said

"Don't be dumb," said Tigala behind me.

I looked at her, confused. "What?"

"They're fairy tales. Do you seriously think they're real?" Tigala asked in a disgusted tone.

I scowled at her. "I was asking if they are. Sorry for not getting a proper education in one of the many Treek schools that have been burned to the ground."

She took a breath and swallowed, not willing to say anymore and I was okay with that.

The Dwarf broke the tension with his answer. "Um, uh, no. There were no dragons in my land. It's just an old folk tale of my people. It does make you wonder where legends of dragons originated though. Every race seems to have stories about them."

"That's too bad. It'd be cool to see a dragon flying through the sky—or better yet—to ride one," I said ignoring the scoff that it probably would have drawn from Tigala had I not just shut her down.

"I don't know about that. They're usually depicted as extremely dangerous. They breathe fire and they're as big as a house," said the Dwarf.

I shrugged, "What's life without a little danger?"

"Heh, yeah," he said. He seemed to feel a little awkward, nodding his head as he looked back to the wall in front of him. Maybe he was unsure of how to talk to a Treek, or a lady, or a fellow prisoner. His face looked dirty but had lines running down it from sweat or tears. He was slouched against the stone wall with muddy clothes.

The Dwarf looked at me again like he was making sure I was still talking to him. "I—I'm a drunk. They don't like that I haven't been helping, but I just can't bring myself to."

"I'm not a fighter, and I can't use magic. I've tried, but it's not my gifting. I was a coal miner. What does a coal miner do in a place like this?"

He sighed and looked at the ground. "I came here to meet people in the first colony."

He gave a cautious nod and said, "Marv." He stared at the floor for a moment and then said, "What got all of you locked up at once?"

"She brought a forest to life," said Zef with a smile on his face.

"I didn't do it for fun or anything. We all almost died out there. There were trolls attacking all of us and the Beastfolk search party was after us too. It was a big mess, and somehow that got us out of it," I said.

"Yeah," I said, thinking back on the events. I hadn't really had a chance to process everything that had happened between fighting in the treetop village, passing out, saving Lobo, and passing out again. I couldn't believe I survived. But what was even more impressive to me was the fact that I had done that. Somehow, by using those veins, I was able to not only animate shrubs and branches, but I animated trees too. I made trees walk! I didn't even know that was possible.

I guess it did make sense though. I had seen Humans make humanoid creatures out of flame that they could control. Maybe this was just the nature version of that.

But still. Could Mother make trees walk? Was she that powerful? Did she know it was possible? I wondered why she hadn't told me about something like that. Maybe she planned to when I was older, when I was strong enough to handle that level of magic.

Either way, I couldn't believe Lobo pushed us into this situation. He attacked us—attacked me, and I didn't see any of them locked up. Just us, because we're the oddballs—the outcasts. Because we cooperate with other races, we are in the wrong—we are the criminals. I felt the blood boiling inside me. Stupid Lobo and his arrogance. He probably made that smudge on the map just to put me in that situation in the first place. That and to provoke Tigala into choosing a side. Jerk.

There was a loud squeak of metal as the metal door across the room opened. Rodrigo walked in with the Elven representative and a Beastfolk that looked like a hippopotamus with a wide mouth and gray skin. Behind them, was a rabbit-like Beastfolk. Her long floppy ears were tied above her head like someone might tie their hair and she had gray fur with only a thin sleeveless robe for clothing. I had seen the rabbit Beastfolk before: one of Rodrigo's fellow representatives.

They approached the cell containing Tigala and Lolan and Rodrigo produced a key from his pocket.

"Tigala. We need you to cooperate. We're going to try and heal the Elf," said the rabbit Beastfolk.

Tigala looked up at him and nodded.

Rodrigo turned the key in the lock and stepped out of the way as the hippo Beastfolk stepped into the cell. She knelt down by Lolan's side and pulled his shirt up, revealing a bruise that covered half of his chest. I winced without fully meaning to.

The hippo laid her grey hands on Lolan's olive skin and a faint orange glow covered him. The purple bruise began to recede slowly, chased back by orange light.

"How do we know she won't hurt him?" I asked, looking at Rodrigo.

"You don't have much of a say right now," said Rodrigo. "We need him awake to answer questions."

"They attacked us," I said, referring to what must have been the previous day now.

"Yes, they told me that you would say that," said Rodrigo. "But you all seem to be relatively fine while the Beastfolk lost a member."

"What?" I asked with my heart beating so hard I could hear it. I looked at the others, who seemed to be equally surprised, and then back at Rodrigo. "Who?"

"You killed Mila," he said. He gave no details or explanation. He only stared at me—through me—as I considered it.

Had I killed her? The last time I had seen her was during the fight in the room with the dead deer Beastfolk. And then I blew everything up with nature magic...or something like that. But I didn't attack her. I was trying to get all of us out of there, not kill anyone. How could that happen? Even if they were jerks, even if Lobo tried to kill me, that wasn't my goal.

I'm a survivor, not a killer. I do what I have to in order to survive, but I wouldn't go that far. Would I? Did I subconsciously do it on purpose somehow? I was really angry at them, at Lobo. Maybe I did do it on purpose. ...Maybe I am a killer.

I looked back at Rodrigo with my eyes wet and my mouth agape. I shook my head back and forth, trying to find the words. Rodrigo cut me off before I could.

"And they're saying you killed another Beastfolk too. I'd worry more about what we're going to do to you if we decide they're telling the truth."

Subscribe now to receive a 3,500-word subscriber-exclusive bonus chapter, the Sprig (Book 1) eBook, printable bookmarks, and a map of Daegal.

2020-08-16T07:39:00Z /TheLettre7\ said:
I mean it was in self defense not like she had much choice with many things all trying to kill her everyone went a bit Overkill

Also typo near the top

The bird bit Rodrigo's finger before they were able to trap it, but he Chipry didn't look harmed," said Zef.

Don't think you need he there

Next one of the morning