A note from houston

If you prefer to read in other formats or want to say thanks for the story, you can now pick up Sprig's first arc in Paperback and eBook. Buy it now at any of the links below! If you want to say thanks without spending money, leave a review on your favorite marketplace. 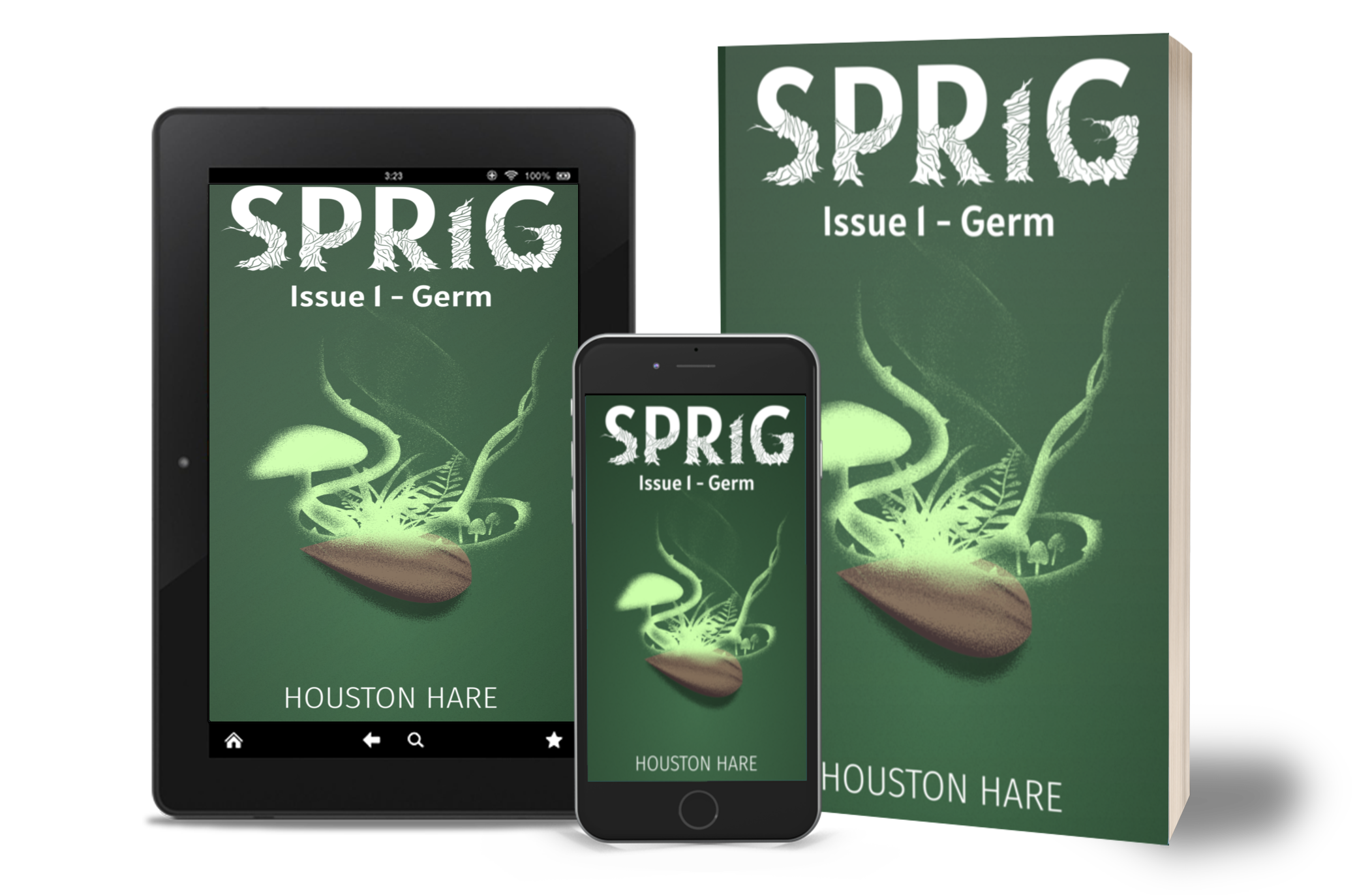 "Welcome to the new land of Daegal!"

The captain's voice was barely audible over all the chatter. He let out a hearty chuckle. "Now get off my boat, ya filthy lot." At his command, Humans began shuffling down the gangplank and onto the docks.

I hung back with my hood up, staying behind while the crowd of Humans dissipated. I kept a small sack over one shoulder while Chipry sat on the other. I looked over at him.

"We made it, Chirpry," I said. The colorful tropical bird made a trill chirping noise. "Maybe we'll find you some new friends after all."

The captain yelled out once again. "Everybody off! No getting cold feet on me!" He directed his gaze at the stragglers, me included. He laughed again and snorted. "I've put up with all of you for long enough."

I made my way to the end of the line, shuffling down the gangplank. The salty air of the ocean was something I was happy to leave behind. After I reached the dock I made my way through the crowd of Humans. I could see the colony past the shore. The supposed attempt at working together. Yeah. Good luck, I thought to myself.

"Move aside!" said a burly man in a tight shirt as he carried a large chest over his shoulder. I stepped out of the way in time to avoid him walking into me.

The dock bustled with Humans shuffling to shore. I squeezed to one side of the dock to get a better view of my surroundings. On the next dock over was a ship of similar size to ours but of a noticeably different style. Where the one I had ridden on was practical, the other ship was ornate, the hull made of dark, delicate wood. It was pristine and looked as if it was almost untouched by the waves. All the railings and edges were coated with yellow shimmering paint while the rest of the boat was dark charcoal. Where our ship had straight lines, theirs had curves and spirals. Their large yellow sails were stylized with paintings of storm clouds, with bolts of lightning striking downward in an arc.

It was the Elves. People crowded their dock as well, most of which were tall and slender. As far as I could tell from the distance, they all had pointed ears too.

As I watched, I felt that some of the paint on my skin had rubbed off my hand and onto the pole I was holding myself up with. It had been on for about a week, so I wasn't surprised. I covered the mark with my hand and checked to make sure no one was looking. I pushed off the pole and ducked back into the crowd.

I'm sure I'll see the Elves soon enough anyway. Now, it's time to find some fresh water, I thought. I was parched due to the dwindling supply of fresh water on our boat and the caution I had to use around Humans.

I reached the end of the dock and followed the other arrivals up the beach to the entrance of the colony. A tall palisade of rough-hewn logs stood before us. I could make out two people standing up top, armed with bows. They weren't particularly interested in any of us.

Facing the docks were two large wooden doors, providing passage for the weary travelers into their new home. Some of the veteran colonists, standing by the entrance, were pointing the way and answering questions for the more vocal Humans. I kept my eyes down. They were all Human as well.

The veterans guided the groups into a part of town that was devoid of buildings. Instead, a sea of tents awaited us, aligned in winding rows, separated by muddy, uneven walkways.

As we walked, I kept my head down to keep from sticking out, but I still snuck glances at the residents of the encampment. We passed a group of Saurians, eight-foot-tall lizardfolk, covered in scales and wearing crude bone weapons on their sides. They were outside their dome-shaped tents cooking over a fire. The aroma of roasted fish penetrated my nostrils.

Next, we passed a series of smaller huts that seemed a bit silly in their whimsy. With the irregular shapes of each hut, they looked more likely to fold in on themselves than stand upright. Two half-sized folk walked out of one of the huts and watched us as we passed. Gnomes. One may have winked at me, but I wasn't sure. I broke eye contact and ducked away, finding myself on the other side of the crowd.

There, I saw short tents lacking all the whimsy I'd seen from the Gnomes. They were a basic A-frame of sticks with canvas draped over the top. They surprisingly looked more unstable than the Gnomes' huts. Two half-folk men with stocky builds and thick beards fumbled as they attempted to stand up their own crude shelter.

I guess the Dwarves don't go camping much, I thought.

We passed the Beastfolk last. Their shelters could barely be called shelters. They only consisted of a single canvas with a few poles to form a portable lean-to-like structure. The Beastfolk themselves were hard to look at. They all walked on two legs and were about the same height as Humans, but they looked like animals. One had a face resembling a wild boar, tusks and all. Another looked like a wolf with sharp teeth, and a third had the head of a cow, the pattern of black spots on white fur running across her body. They glared at us as we passed, never turning their backs away.

We reached the end of our racial tour of Daegal at an open part of the field, still within the palisade. The Humans I came with began assembling their own tents. Canvas and long poles turned into rows of tents tall enough to allow a Human to stand up straight. The veterans informed us that we would all need to meet at the town square before dusk to learn the rules of the colony. Then, they left us to set up.

I didn't have a tent with me. In fact, all I had was a small backpack with a hammock, a few rations, a knife, and some seed to feed Chipry. I needed water. I was too thirsty to be concerned about preparing a place to sleep.

With everyone focused on claiming their plots, I made my way toward a row of buildings overlooking the tent city from a hill. I kept my head down as I walked so that my face would be covered in shadow. Chipry chattered on my shoulder.

From the top of the hill, I looked down at the sea of tents and found two more sections that I had not walked through. At the end with the Humans, further from where I stood, was another race setting up. The only detail I could make out from where I stood was the charcoal grey color of their tents. It was probably the Elves. Near the other end, closer to the gate we entered through, there was one more set of tents that looked different than the rest. The Avians maybe? I thought.

I shrugged and headed for the town square. It was already starting to fill in with people. Clusters formed throughout, each race sticking with their own.

My eyes widened as I spotted a well in the middle of the open courtyard. I hurried to it, drew the bucket, and drank the water from my cupped hands. I hadn't realized how thirsty I was until I had the chance to drink as much as I wanted. As I tipped my head back a third time to sip the water from my hands, my hood flew off. I choked and spit out water in surprise. I tried to pull my hood back up, but it was being held down. I turned to face whoever was holding it and found a large Beastfolk scowling above me.

We're going to do this already? I just got here, I thought.

She resembled something like a bobcat, with golden tan fur over her whole body, covered with black stripes and spots throughout. Black fur lined the tops of her ears and came to a point. Across her face was a raw gash, still healing. As she held me down she kept her free hand behind her back.

I looked around, trying to determine how she found me out and discovered a white puddle forming on the packed earth of the town square. Flecks of paint swirled about. I inspected my arms and found that the water had washed the paint from them. It was no doubt missing from the lower part of my face as well.

Gasps echoed through the square as people of all different races saw me. Not one of them was a Treek, like me.

"Scum like you were supposed to be killed off!" the Beastfolk woman said. Her words seethed with anger.

My eyes went wide. I raised my clean hands as a sign of peace and tried to back away.

"You don't get to walk away from this," she said.

At that, she began to transform. She rocked forward and landed with her hands on the ground as her muscles grew and her limbs realigned. Her fur darkened to black and orange as she unleashed a thunderous growl. I stood five and a half feet short in the middle of the town square, staring down a massive tiger. She roared, then spoke with jungle cat vocal cords, causing a thick purr to corrupt her words. "You're a monster!"

I'm thinking of switching to a different release schedule so that I can get chapters out quicker. I'm thinking of posting every five days. It would make the day of the week different each time, but since I don't think I can keep up with a twice a week schedule, I think it would be the next best option. Let me know what you think in the comments. Thanks!

2020-08-13T10:20:00Z TheLettre7 said:
Off to a great start. love the descriptions of everything. the beastfolk seem the most interesting to me, other than the the Treeks. I wonder why there's so much prejudice, I'll find out soon lol

Great chapter, on to the next.